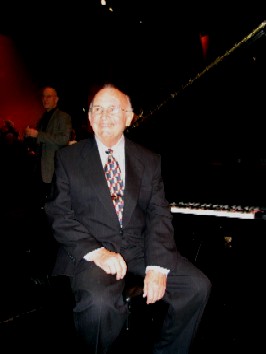 I have the distinct pleasure of dedicating this wonderful instrument to the recognition of a man who has done a great deal for this community.

Ben Smith was for 31 years a respected educator in the Sault’s public secondary system. He began his teaching career in 1955 and taught business subjects at the Sault Collegiate Institute, Korah Collegiate and Sir James Dunn Collegiate. He was a department head for many of those years.

In the middle of all this, Ben was very active with the Community Concerts Association, which for so many years was primarily responsible for bringing Sault world-class performers to Sault audiences. He was associated with Community Concerts for almost 30 years, and again many of those as President. In 1959, Community Concerts was presented with a Steinway concert grand piano. Ben was very involved with the care of that piano, and when the Association wound up its local operations, he managed its donation to the Community Theatre Centre. When at last it became clear that the Steinway had reached the end of its days and couldn’t be reliably restored, it provided significant seed funding for our new Yamaha.

Ben was active in other community organizations. He was a director of the Arts Council of Sault Ste. Marie & District, and served on the executive committee of the Council.

Ben was active with the Community Theatre Centre from its inception, when we were raising funds for the renovation of this facility and executing the renovations. He was an early member of the Board of Directors and became President of the organization. It is worthy of note that he was President during the years we were burdened by renovation debt. I might add that those were not pleasant years to be President of the Theatre Centre, as you can imagine. But Ben shouldered the load and got us through it with his usual good-natured approach to life. He continues to be active on our Board.

So it is completely fitting that this plaque be placed permanently on the new piano in recognition of Ben’s many years of service to the Sault Ste. Marie cultural community, the Community Theatre Centre and the assurance of a world-class piano to the artists who perform here. The plaque reads:

This plaque will be placed prominently on the piano so that pianists who play it will know that Ben Smith is an important reason it’s here, and so we may all remember that our community’s cultural life is the result of the efforts of Ben Smith and the many other “Ben Smiths” of this community who give so unselfishly of their time and talents.

Ben, thank you for your leadership and dedication. Bravo!